Due to the ongoing political unrest in Sri Lanka, shipping lines are going for transshipment routes that do not pass through the port of Colombo for transport of goods to and from Chattogram port.

The main line operators are now looking to ports in India, Singapore and Port Kelang.

Meanwhile, feeder vessel operators who still use Colombo port have said the volume of goods transported through this port has decreased significantly, and it might drop further in future.

Colombo port was temporarily closed on 10 May due to the recent political unrest in Sri Lanka. Unable to dock at Colombo port, five mother vessels of Mediterranean Shipping Company (MSC) docked at Ennore Port in India.

Ajmer Hossain Chowdhury, head of operations and logistics at MSC, told The Business Standard, “We have diverted five mother vessels of our company, which were heading towards Colombo port, to India. From there we shipped the goods to their various destinations.”

The ships were carrying goods imported in Bangladesh and India. Six feeder vessels of MSC operate on the Chattogram-Colombo route.

HR Lines, owned by the Karnaphuli Group, operates eight voyages with four feeder vessels on the Chattogram-Colombo route to transport around 9,000 containers per month. However, due to the economic downturn and the political violence in Sri Lanka, the company reduced transporting goods on this route by almost half.

A senior official of HR Lines said one of the company’s ships – HR Farha – is scheduled to leave Chattogram port for Colombo on 15 May (Sunday). The ship usually transports about 1,200 containers, but it received bookings for about 600 containers till Saturday. Crisis in Sri Lanka as well as the Eid holidays caused the drop in bookings.

Due to the shallowness of depth, ships with a depth of more than 9.5 metres cannot enter jetties at Chattogram port. As such, goods are first transshipped from Chattogram to Sri Lanka, Singapore and Malaysia by feeder vessels, and from there to the destination countries by mother vessels.

Direct shipping from Chattogram to Europe has recently started, but goods carried through this way are very limited in volume.

According to people involved in the shipping sector, 40% of Bangladesh’s exports are transported from Chattogram, using the port of Colombo. The remaining 60% of products are shipped through Singapore, Port Klang, Malaysia and Tanjung Pelepas.

Rakibul Alam Chowdhury, vice president of Bangladesh Garment Manufacturers and Exporters Association (BGMEA), said the ongoing violence in Sri Lanka has been hampering the smooth transportation of goods. So buyers are using alternative routes such as Singapore, China and other ports to pick up goods.

Officials of shipping lines operating feeder vessels on this route said many of them are considering using other ports, including Krishnapatnam port in India. 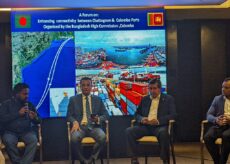 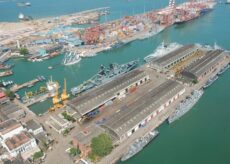 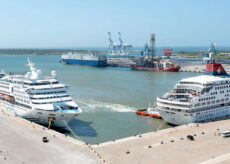